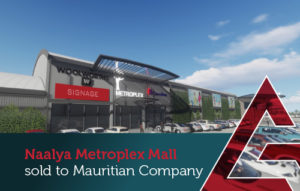 Naalya based shopping mall, Metroplex has been sold to Gateway Delta, a Mauritius based company.
Speaking during the announcement of the sale, Mr Marc Du toit, head of retail portfolio Knight Frank, said the sale of Metroplex was brokered for one and a half years.

Ms Pumi Lukhele, development manager Gateway Delta said, “We are currently finalising the acquisition of Metroplex shopping mall and local consultants have already been appointed to commence with the redevelopment process.”

She added, “The location of Metroplex shopping mall is absolutely ideal from a retail point of view, especially with the construction of the new access road from Kyaliwajjala-Naalya road, expected to be completed this year, 2019.”
The 13,000-square metre mall, expected to officially open in April 2020 is expected to create over 2,000 jobs, with 800 during the construction phase, and 400 and 1,000 direct and indirect jobs respectively after the opening.

Ms Lukhele said redevelopment of the mall is expected to draw further foreign direct investments with international retailers already showing interest in retail space.
Already, French supermarket chain, Carrefour, announced that it would make its entrance into Uganda, opening two stores at Oasis mall and occupying 3,400sqm at Metroplex.
Other retailers including Woolworths, Bata, Café Javas and Pep among others have shown interest in retail space.

Current tenants, Mr Du toit, said were given notices of the redevelopment which will happen in phases.
Answering queries on the exit of supermarket chains, Shoprite and Nakumatt from the mall, Mr Du toit, said that the failure of many regional companies is not the lack of market, rather mismanagement.

“International retailers see the opportunity in the local market and the expertise and management is far superior hence the sustainability is far better,” he said.
Stalling in the development of the Northern Bypass road, he said, also had an effect on operations of the mall.

It is a private real estate development company registered in Mauritius. It specialises in turnkey construction of accommodation for international companies and retailers who wish to expand their operations on the African continent.